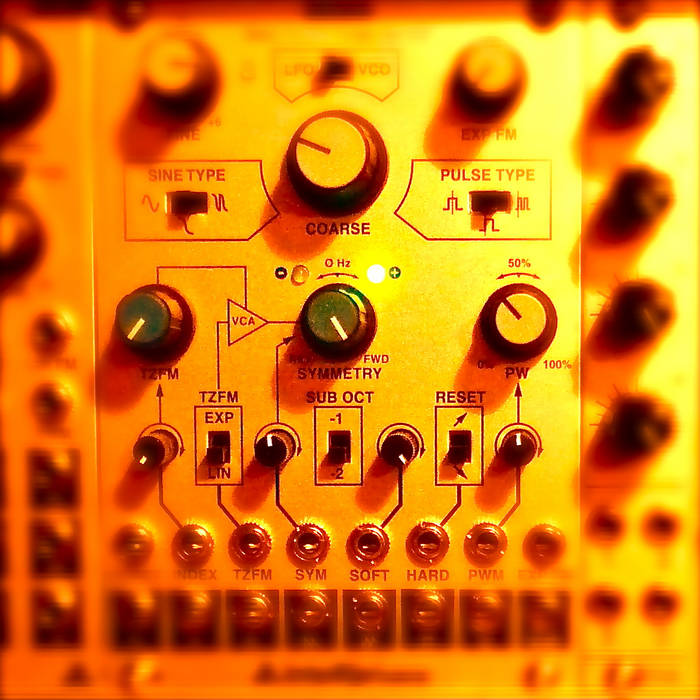 This is a little experiment to see how a relatively simple monosynth can be enhanced through the addition of a small eurorack "add-on" system: In this case, a Doepfer minicase (32HP) containing an Intellijel Rubicon (complex oscillator with Thru-Zero FM), Doepfer a171-2 (Serge VCS clone, which can be used as an envelope, lfo, slew limiter or oscillator) and a Manhattan Analog Mixer (3 channel, high fidelity mixer). The Rubicon's outputs were summed with the Telemark in its internal VCA, and this seems to add a pleasing warmth to the end result. The SYNC of the Telemark is especially nice, and some lovely "phasing" type effects are achieved.

An Analogue Solutions setup was used as the main body of the patch, comprising the Oberkorn Sequencer and Telemark Monosynth (based on the Oberheim SEM, but with additional patch points for interfacing with a modular setup).

1. A simple patch was set up on the Telemark, using its two oscillators - one set to Saw and the other Pulse. They were both sequenced by the Oberkorn's Channel A output, and this sequence was also multed to the Rubicon's 1v/oct input.
2. VCO1 of the Telemark was used to SYNC VCO2, and also the Rubicon, via its HARD SYNC input. This keep the patch mostly in tune, and also allowed for complex modulations without losing all semblance of tuning.
3. The Telemark's 2 envelopes were triggered by the Oberkorn on each beat (16ths), and envelope 2 was used to control the main VCA.
4. The a171-2 was used as an envelope, and was set to CYCLE at points too. It was triggered on 16ths, using the TRIG input.
5. Channel B of the Oberkorn was used to sequence the Lowpass Filter cutoff, which was simultaneously controlled by the a171-2. Towards the end envelope 1 on the Telemark was applied to the filter cutoff instead of the a171-2.
6. Channel C of the Oberkorn was used to control the rate of the a171-2's RISE and FALL (attack and release) times. The output of the Telemark OSC1 (saw) was sent into the Rubicon's TZFM CV input, and its intensity was modulated by the Oberkorn's Channel C also (via the INDEX CV input)
7. The a171-2 was also used to modulate the Rubicon's frequency, via the Exp FM CV input.
8. During the recording various controls were manipulated. Telemark: LPF cutoff and resonance; Mixer's wave balance (including the Rubicon's output, which was sent into the Ext 4 input, and contained a mix of the Sine and Double Pulse); OSC2's Coarse Tuning and Frequency Modulation (from its internal LFO); and the External LPF cutoff modulation (from the a171-2). a171-2: RISE and FALL times; CYCLE function.